Vancouver Fashion Week, back for its 2022 Fall/Winter edition this week, has become a runway to success for many immigrant and Indigenous fashion designers. 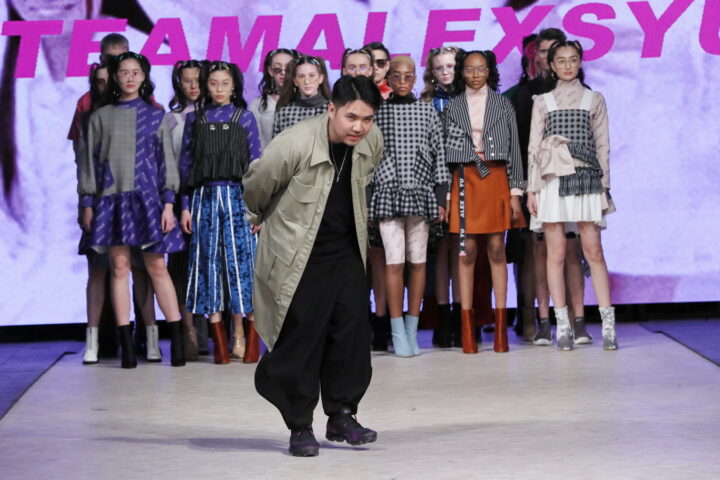 Searching for a new life and career, South African immigrant Larainne Kaplan came to Vancouver in 2003 carrying two garbage bags full of clothing samples made by a family charity program near her former home in Cape Town.

“I wanted to pursue having a fashion business with a strong social responsibility component,” said Kaplan, who was transitioning from a 15-year career as a social worker in South Africa.

“And then I met him, and he helped me get my business going,” said Kaplan, pointing to Jamal Abdourahman, the founder of Vancouver Fashion Week (VFW), in an interview with New Canadian Media.

“Behind the Scenes” experience

After completing his education at the London College of Fashion, Taiwanese-Canadian Alex S. Yu launched his label at the September 2014-edition of the Vancouver Fashion Week.

Since then and after 12 VFW shows, his collections have been presented at fashion shows around the world while his designs have dressed celebrities, including Canadian-American actress Sandra Oh and Taiwanese singer Miu Zhu.

For Metis designer Jade Tetrault, this week’s VFW 2022 Fall and Winter show, is providing her “a behind the scenes” experience.

“It’s a great place to get fashion design experience,” said Tetrault, who is hoping to have her Indigenous-inspired ‘Arrowhead” dress featured at VFW’s next show.

Kaplan, Yu and Tetrault are among the scores of new Canadian and Indigenous designers, who have over the past two decades, launched and initiated their careers from the VFW runway, which is now the second largest Fashion Week in North America, after New York’s.

“At Vancouver Fashion Week, diversity really is our greatest strength,” said Abdourahman, who arrived in Toronto in 1990 as a refugee from Djibouti, a tiny country in the Horn of Africa.

Aside from being the longest running show of its kind, Abdourahman, and his Global Fashion Collective (GFC) team, hold special events that run alongside the New York Fashion Week, Tokyo Fashion Week, and Paris Fashion Week. VFW also has a special Kids Fashion event.

“Over the past few years, we have been getting more and more inquiries from international fashion students, new immigrants and First Nations designers,” said Abdourahman.

“Fashion is a truly global phenomenon and it’s so inspiring to see such a strong mix of designers all under one roof here in Vancouver,” he said.

Among this year’s presenters are Inuit designer Martha Kyak and Sri Lankan-Canadian Sujitha Shivajothi, who has a gender-inclusive design label.

Vancouver as a fashion hub

Vancouver mayoralty-candidate Mark Marissen, long-time fan of VFW, is hoping the event will continue to grow and provide opportunities for upcoming fashion designers.

“It’s a fantastic event that has already put our city on the global fashion world and if elected, I hope to make it a key signature event for Vancouver,” he said.

According to a market entry report prepared for the European Union’s fashion industry, the Canadian global retail sales of apparel reached $35.27 billion in 2019.

The report singled out the Vancouver Fashion Week as one of the most popular events in the city.

“Being home to people of different backgrounds, especially from East Asia, Vancouver is the hub of fashion and style,” said the report.

“The VFW events features designs from established, as well as newly emerging fashion brands and is a focal point for local fashion start-ups which have flourished in the past few years,” Alex Martyniak, Executive Director at European Chamber of Commerce in Western Canada, told NCM.

According to CanadianVisa.org, an accredited immigration agency, Vancouver is the top Canadian city to immigrate as a fashion designer.

WorkSafe BC estimates job openings in this category to jump by almost 52.7 per cent over the next decade.

Canada’s Job Bank estimates that between now and 2028, 9,300 new job seekers, including school leavers and new immigrants are expected to fill jobs in this sector.

Editor’s note: This story has been updated to include references to work prospects for immigrant fashion designers in Canada.