We’ve seen Olivia Rodrigo get dressed up for her staged prom night (iconic) and felt all of the relatable elements of teenage nostalgia. Now we’re taking it up a notch and get to witness the momentous debut of Olivia Rodrigo’s Grammys 2022 look. While the casual relatability of prom night has disappeared, it’s so fun watching the singer live out her childhood dreams at the 64th annual Grammy Awards. Let’s be real, we all wanted to be pop stars right?

Olivia Rodrigo’s pop star career took off during Covid but that didn’t hold her back from setting new records in the music industry. After her album Sour was released, Rodrigo broke Taylor Swift’s record for most songs in the top 10 of Billboard’s streaming chart by a female artist.

Olivia Rodrigo could break more records tonight. Rodrigo is nominated for an astounding seven Grammy awards for her debut album, Sour—no small feat for the recently turned 19-year-old. The postponement of this year’s Grammy Awards meant that we had to wait 3 months longer to see how many awards Olivia Rodrigo would pick up and what the pop star decided to wear for the big night. 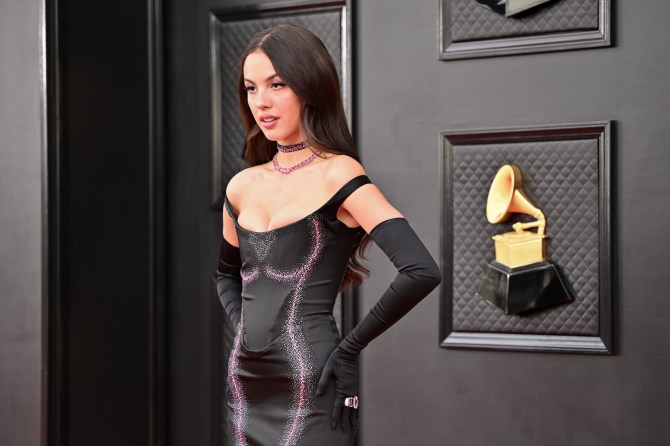 I think it’s safe to say that it was worth the wait. Olivia Rodrigo showed up to her first Grammy Awards in a punk pop-princess look by Vivienne Westwood. The singer wore an off-the-shoulder long black gown with pink glitter outlining her silhouette. In true princess fashion, the look was paired with long black silk evening gloves and a Cinderella-esque matching choker necklace. 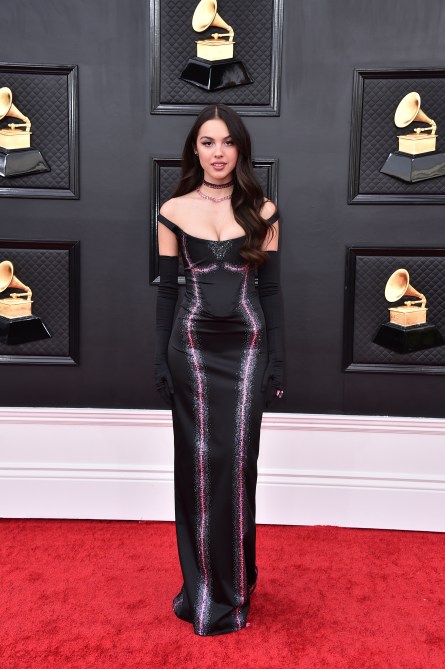 Every princess needs a few jewels, so Rodrigo completed the ensemble with a pink jewel necklace hitting right at her collarbones. Looks like Cinderella’s Fair Godmother went goth—hopefully she’s waiting in a carriage somewhere to help Rodrigo carry home her potential awards.

Olivia Rodrigo kept the subtle goth vibes going with her makeup look. Rodrigo has been known to wear colorful makeup or a bold lip but tonight, she toned it down. While the majority of her makeup was natural and neutral, she spiced it up by matching a thick black cat eye to her dress. If you look closely, you’ll even see a hint of pink glitter shimmering on her eyelids. 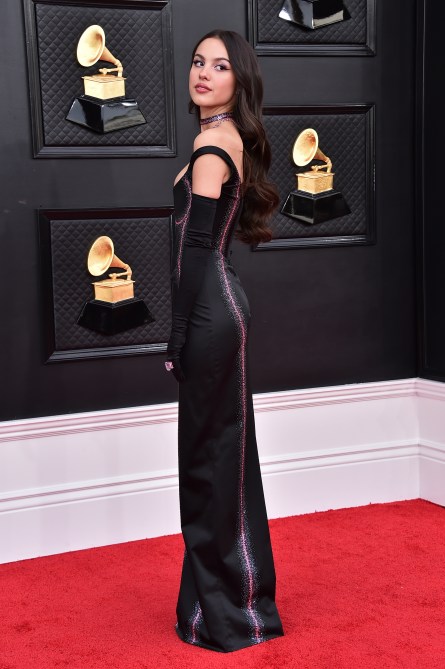 Olivia Rodrigo’s Grammys look is perfectly in line with her typical style and especially compliments the tone of her music. Rodrigo manages to channel both teen-angst and youthful fun into her songs on Sour and her princess-goes-goth look is the perfect representation of that. It’s playful yet mature, trendy yet classic. The look is a hybrid between the ’90s Avril Lavigne era that Rodrigo often gets compared to while incorporating the sweetness of her Disney roots. In essence, it’s a perfect balance.

Once Rodrigo signed to Interscope Records, we saw a major shift in her outfits. The teen went from conservatively-dressed High School Musical Disney star to a world-renowned pop sensation (cue Hannah Montana theme song). Now Rodrigo is the queen of mini skirts, cut-outs and sour candy. I’m sure everyone will be wearing chokers for every occasion again by next week.