WWE’s Greatest Ever UK Event Merchandise- UK WWE events have had some of the Greatest Ever merchandise the company has produced.The historic announcement that the WWE is returning to the UK to hold its first major stadium show since SummerSlam 1992 emanated from the old Wembley Stadium that August has created a buzz around the UK wrestling community not seen in decades, with excitement at a fever pitch for the nation hosting another ‘big show’ from the WWE even before a single match has been announced for the card.

The first weekend in September will see the WWE Universe take over the Welsh capital of Cardiff, as the principality stadium will host the event, with an estimated 75,000 fans in attendance for the extravaganza.

John Porco, WWE Senior Vice President of Live Events has promised that, “The weekend will be filled with a variety of WWE experiences that we believe will leave a lasting memory, on par with SummerSlam at Wembley Stadium in 1992.”

Superstar meet and greats and community engagement events seem guaranteed, as does the huge array of merchandise that will be available in the build up to the event, from the venue and the superstore that will no doubt cross the pond along with the WWE Superstars.

WWE is no stranger to these shores, holding its first UK event at London’s Docklands Arena in October 1989, with merchandise, then hard to come by this side of the Atlantic, flying from the stands.

Merchandise has always been popular to UK WWE fans. From t shirts and bandanas, wrestling action figures to programmes, to foam belts and hands, fans have ate it all up.

From the early days of catalogues in programmes and merchandise only available through the post and offers with VHS tapes, to the birth of WWE Euroshop and other retailers, the company knows how to appeal to its fan base, in order for them to part with their hard earned cash, particularly at live events.

With the Wales Premium Live Event set for Saturday 3rd September 2022, just over thirty years since the iconic SummerSlam 1992 PPV at Wembley, here we look back at a selection of some legendary WWE UK event and PPV merchandise from the 1990’s.

Held on October 3rd 1991, and broadcast live across Sky Movies Plus as an exclusive UK event, Battle Royal At The Albert Hall featured half of the WWE crew of the time, competing for the prestigious Royal Samovar Trophy in a 20 man Battle Royal main event. Featuring top stars of the day The Undertaker, Texas Tornado, Big Boss Man and Earthquake, the Battle Royal was finally won by UK hero and top home grown Superstar The British Bulldog who last eliminated Natural Disaster Typhoon to win the Tea urn!

To long-time fans, the event remains fondly remembered to this day. Although a popular venue for British wrestling since 1904, the venue was more famous for its concerts and music events, allowing the unique setting of the oval shaped Hall with its plush interior and its private boxes to make the event special and stand out.

The WWE respected its setting, encompassing a brilliant t shirt design that was the first WWE event t shirt made for a specific event in the UK. (Tour t shirts at each venue had accompanied the earlier visits across the pond, complete with the full dates for the tour on the back). This was different, a shirt designed specifically to accompany the specific event as had regularly happened with US based PPVs in the years prior.

The traditional black shirt took on a hint of decorum as it featured a bow tie and waistcoat outline, emblazoned with the WWF logo of the time to the left hand side.

The back featured the name of the event, in a traditional Royal Albert Hall logo motif. Ghastly to some, genius to others, the shirt fed into the pageantry of the event being held in the Royal venue and allowed fans a tongue in cheek way of wearing black tie on the night as is tradition at the Hall for more formal events. 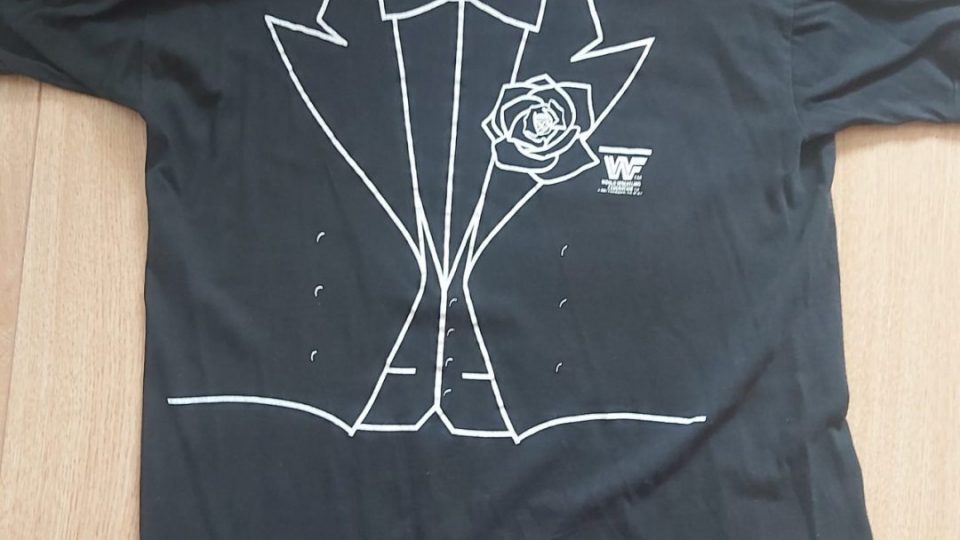 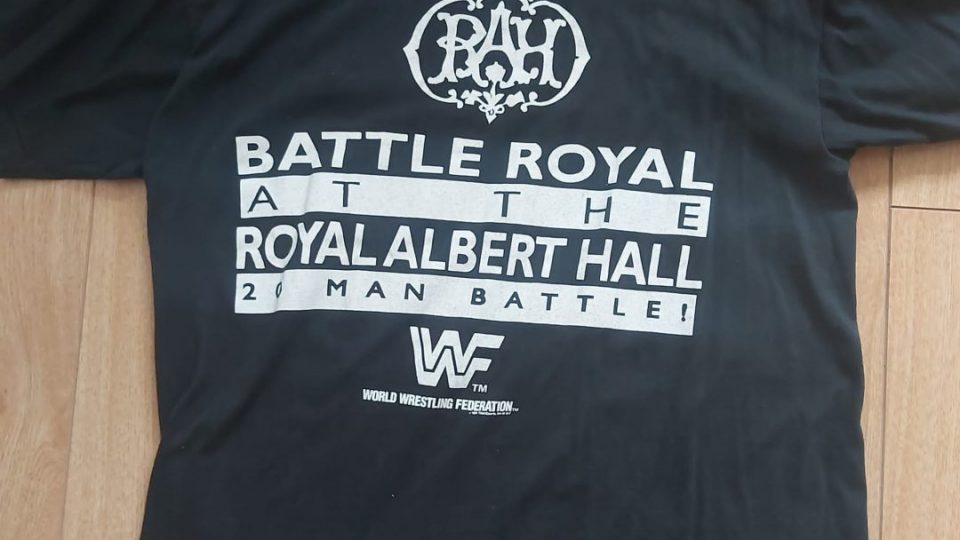 Fans ate it up with many being seen sporting it during the nights action. Quite a hard find today, expect to pay upwards of £80 to purchase.

More widely available after the event was the VHS, made available by UK distributor Silver Vision as a UK exclusive release quite early into its range. As well as the aforementioned Battle Royal, the event featured a cracker of a bout between Ric Flair and Tito Santana.

The biggest wrestling event this country has ever seen, it’s estimated that the over 80,000 fans in attendance on August 29th 1992 spent over $1.5 million just on merchandise alone. And who could blame them with such iconic goodies up for grabs that all fetch a pretty penny today.

The foam finger/hand for this event is a favourite, a funky green foam, seemingly bought by everyone in attendance and displayed across the mass crowd that day. It had the date and SummerSlam logo on one side, along with the logo of The British Bulldog on the reverse.

Personal favourites from the event include the historic programme, outlining the matches across the card, now available for between £20-£50 today, the psychedelic pink, green, orange and silver event baseball caps (expect to pay around £100 if you can find one) and the now very rare waterproof coach jackets in navy or royal blue, emblazoned with SummerSlam logo and WWE motif on the back. What a bargain then at £30.99. WWE had obviously planned in advance just in case of the notorious British weather! 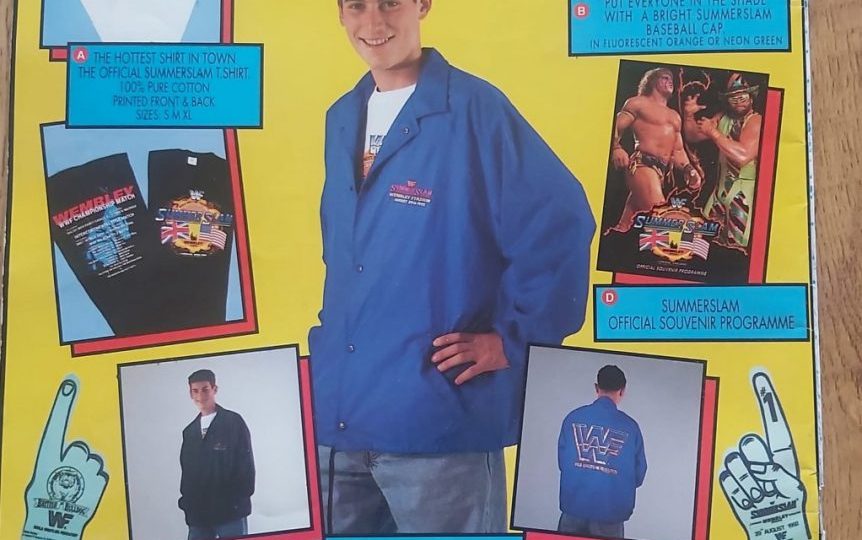 The memorabilia is as iconic as the event itself, just look at all those foam fingers and florescent caps in the crowd as The British Bulldog lifts his Intercontinental Championship after defeating brother in law Bret Hart in a classic.

A tour programme up next, still quite widely available today and you can expect to pay between £15-£25 for it. Its historical context though is fascinating as it represents the final tour and matches in that historic 1984-93 run for Hulk Hogan. 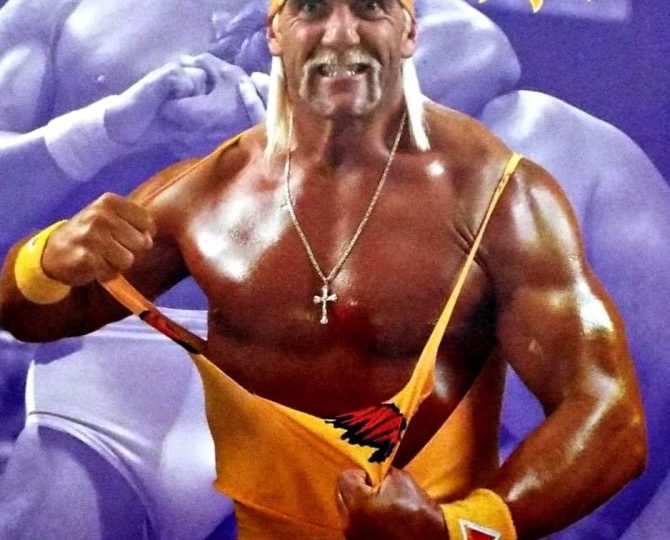 The top star of the WWE boom period of the 1980’s and early 1990’s wrestled Yokozuna to a disqualification victory in the main event of the 6th August 1993 event at The Sheffield Arena that unbeknownst to fans at the time, would become his last WWE match for almost a decade. Also on the cards, Hogan’s nephew, better known as Horace, wrestled as The Predator and The Steiners defended their WWE Tag Titles against The Headshrinkers.

Hulkamania would still run wild, although be it for rival promotion WCW from summer 1994 onwards.

The first exclusive UK Pay Per View, (although also available in Canada), One Night Only was held in September 1997 at Birmingham’s NEC Arena. Fans starved of WWE action sold out the building within hours of tickets going on sale. The UK exclusive Pay Per View offering continued into 1998 with Capital Carnage that December.

The following year, saw two exclusive UK pay per view events and it’s the first of those that we celebrate in this entry.

The UK exclusive PPV No Mercy event tee from May 16th 1999 is a gem. Containing the No Mercy event logo with electric green flashes behind and the stars of the show on the front, it became a super cool item at school the following week, if you were seen strutting around in one channeling your inner Stone Cold Steve Austin, showing everyone exactly where you had spent your Sunday night! 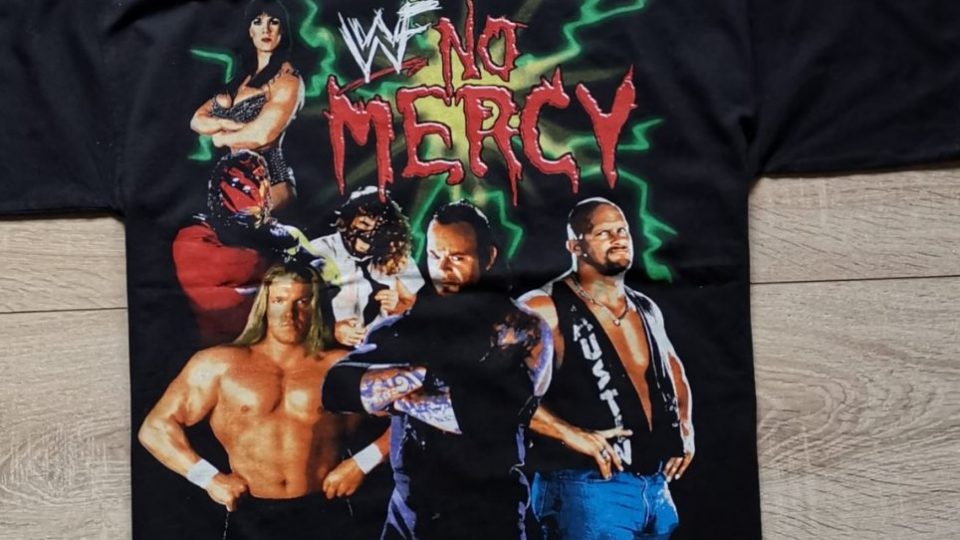 The back of this shirt is equally brilliant, containing the event logo displayed with a map of Manchester, where the event took place at the Manchester Evening News Arena and an all-important rundown of the card of matches, something that you didn’t usually get on the UK event tees. 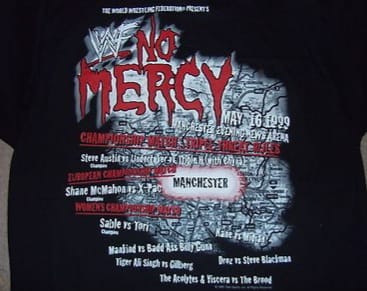 Available not just at the live event on the night but through QVC home shopping channel for a limited period (the company had a number of ‘special shows’ on the shopping network during this time period), the shirt quickly became a collector’s item.

The Attitude era was at its height with this event, with Stone Cold Steve Austin defending his WWE Title in a Triple Threat match against both Triple H and The Undertaker in the main event. The undercard was disappointing as the WWE had only sent over half of the roster, similar to the earlier UK tours. Whilst Shane McMahon and his Corporate Ministry battled X-Pac in Manchester, The Rock was beating The Big Boss Man amongst other matches at the house show in Richmond Virginia.

But It didn’t matter to the UK fans in attendance that night, who got to witness Stone Cold at his popularity peak, the t shirt of the event becoming a treasured memento.

Merchandise is more widely available than ever, with WWE Euroshop and other wrestling sites now easily accessible. There continues to be a demand for retro items, with old event t shirts, caps and accessories constantly increasing in value and demand.

No doubt there will be a few SummerSlam 1992 Bret Hart Vs British Bulldog t shirts on display at the Principality Stadium show this September, harking back to that once in a generation UK wrestling experience. On Saturday 3rd September a new generation of fans will create their own memories.

What merchandise will we see for this new event? A Welsh Dragon plush wearing an Austin 3:16 shirt? A red, white and green t shirt design displaying the Bloodline? Or some other unique and items. Things may become clearer once the event has a name and the first matches are announced.

No matter what is available though, the rabid Brits will snap it all up in support of the historic Premium Live Event so that in years to come, they can reminisce about their big day out with the WWE Superstars in Wales and say, with a gleam in their eye, that I was there!